Please note Joint Control is still under construction, this section only reflects the status at the moment it was written. Further modification will probably be made and reported later.

The Joint Control System (JCS) uses PID regulators  to control the position. However, I soon realized that many other features were requested in order to tune the joints parameters individually and then on the assembled robot :

I had to develop 3 variants of the Joint Control System:

JCS Torque feedback can emulate an output shaft with spring and damper. This  gives compliance to the joints, i.e. flexibility when required to accomodate unexpected / unpredictable situations. Compliance is used for example in the following cases :

Stiffness and damping coefficient can be modified at any moment (Actives modes 65 and 66 – See running modes below). 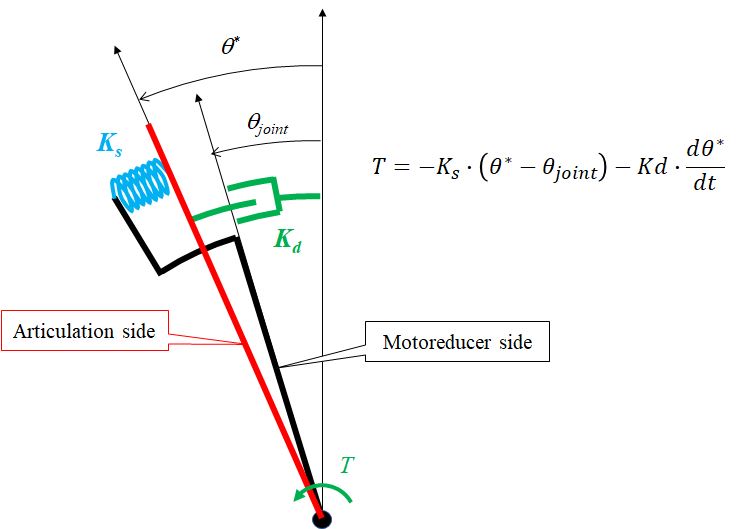 The emulated model of the output shaft of the joint is as follows :

The emulated spring/damper model produces an actuator position  request (as a function of torque and position derivative) which is then controlled by the PID controller.

Note that under torque, the requested joint position can never be achieved. As stiffness is increasing, position error becomes smaller.

I defined an “infinite” stiffness mode when  setting Ks to 255.

A gain proportional to Torque is added to Proportional and derivative gains (tuned by Kpf).

All PID gains are made proportional to Spring Stiffness up to a saturation value (defined with gain tuned with infinite stiffness).

Ki sets Integral gain and is multiplied by Ks. 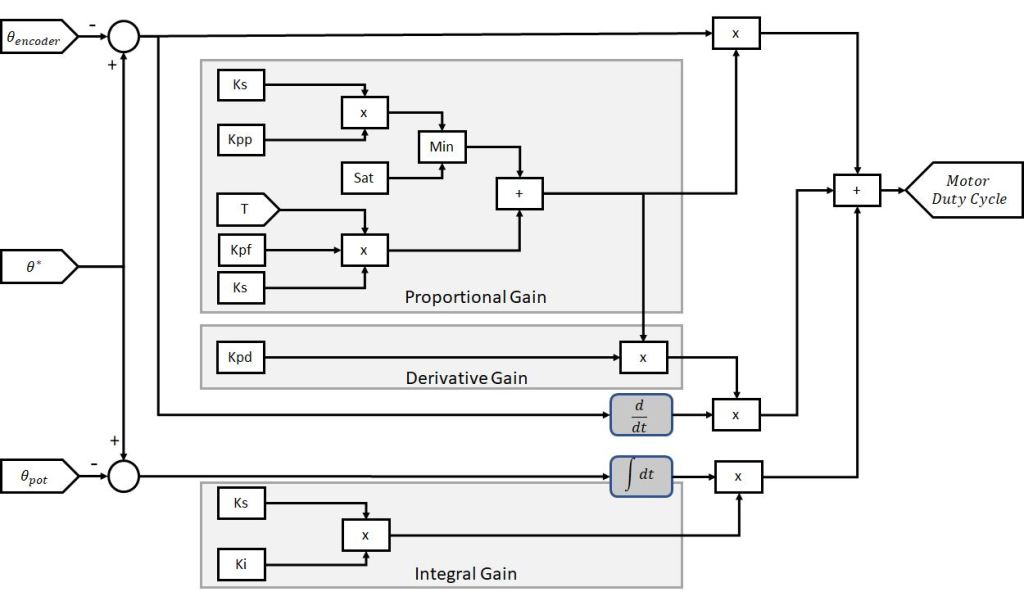 Single Joint without Torque feedback of course implement  neither the spring/damper model nor the proportionality of gains to Torque. Ks in this case is named Kpos (although it can be modified at any time, this is not implement in real usage). 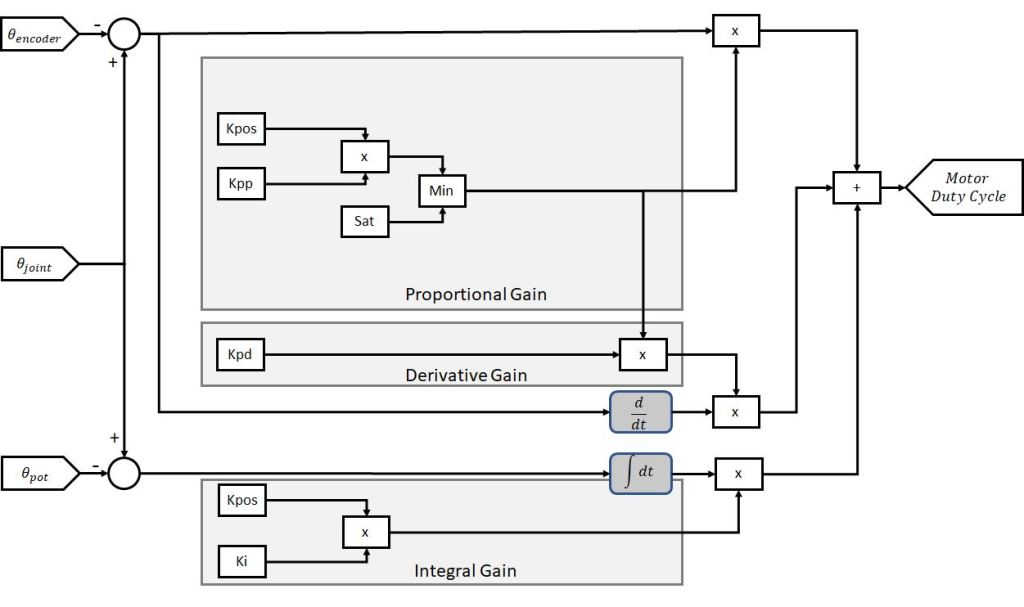 Forces measured on both linear actuators need to be converted to torque. This is done by the following formula :

This formula is theoretically only valid when y5 and x6 angles are equal to zero. So this formula is an estimation but considering ankle angles are rather small, I had no trouble using it so far.

An exact solution can be found here but could generate more CPU load.

Unlike rotary actuators, actuator lengths are not directly proportional to joints angles. Again I use the following formula to convert joints angles into actuators lengths :

In this case, there are no simplification so that encoder positions remain always as close as possible to potentiometers theoretical positions. 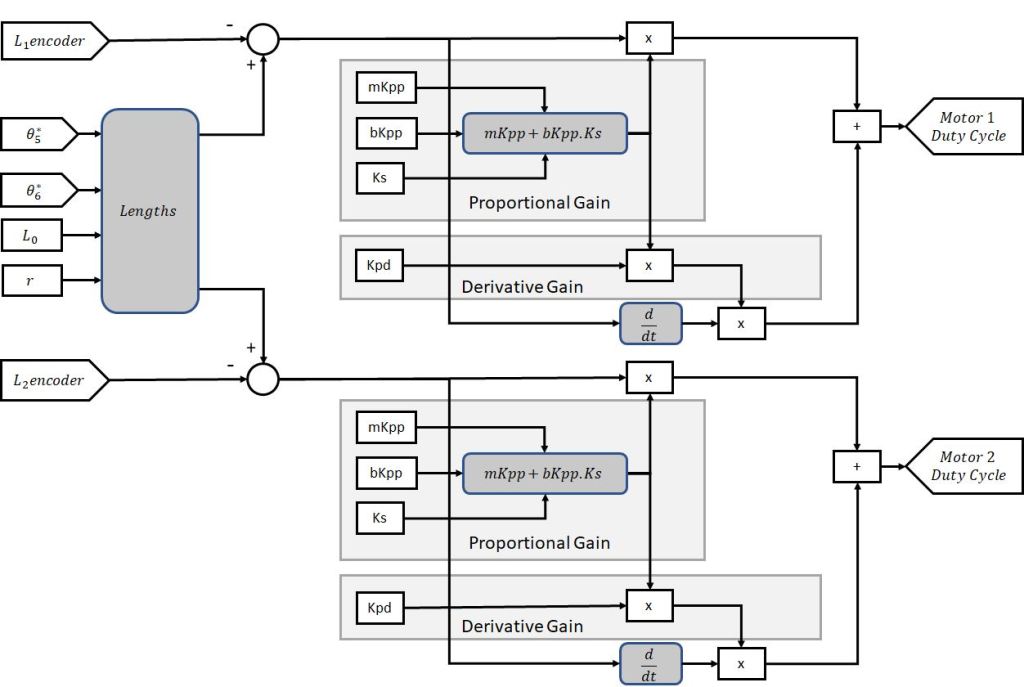 Potentiometer values are only used to supply absolute angle value when switching on the JCB and set the zero position of the linear actuators encoders.

Here is a video showing early tests of the Ankle control (with an Arduino Due board) :

PID output is used as follows :

Single JCBs run at 2 kHz and Dual JCBs at 1 kHz.

At request from the RCU,  Single JCBs :

Checksum byte is a simple 8 bits sum of the 4 previous bytes. The unit receiving the data calculates the sum of the 4 first bytes received and compares it to the fith byte received.

The first byte received, named ModeByte1, describes the  action to implement and the meaning of the  next 3 bytes that follow.

If ModeByte1 is below 63, the actuator is not active (PWM = 0) and next bytes sent are parameters to be updated.

The table below describes the different modes used:

Signals are conditioned/scaled in order to fit into one or two bytes words. JCS recalculates the real values. Scales are defined through experience when tuning paramaters in order to maximise precision and leave enough latitude to modify parameters significantly : so scales mentioned above are only usable with my robot set-up and would not apply if motors, gear ratios, voltages etc.. were different.

Of course data are doubled for dual JCB, first data corresponding to y5 then to x6.

In calibration modes, the JCB resends the bytes received so that the RCU can confirm the parameters are OK.

As for data received from RCU, data are doubled for dual JCB, first data corresponding to y5 then to x6.

All Coding was made using MATLAB / SIMULINK and C/C++

Microchip, the manufacturer of dsPICs, distributes a dedicated toolbox for SIMULINK (MPLAB Device Block for Simulink). A free version is available that can be used with no limitation on 6 references of dsSPIC (including the reference I use for my Robot Project).

MPLAB X IDE must also be installed along with XC16 Compiler.